Carburising is one of the most commonly performed steel heat treatments. For perhaps three thousand years it was performed by packing the low Carbon wrought Iron parts in charcoal, then raising the temperature of the pack to red heat for several hours. The entire pack, charcoal and all, was then dumped into water to quench it. The surface became very hard, while the interior or “core” of the part retained the toughness of low Carbon steel.

Pack hardening is uncommon today, except in a few custom made sporting arms. Now, low Carbon steel parts are heated in a prepared furnace atmosphere that provides the Carbon that diffuses into the surface layers of the steel. Temperatures are usually around 950°C. This atmosphere has traditionally been “endothermic”, using a catalyst to partially burn natural gas. Typical composition of an endothermic gas (Class 302) is 39.8% Nitrogen, 20.7% Carbon Monoxide, 38.7% Hydrogen and 0.8% Methane, with a dew point -20°C. This carrier gas is subsequently enriched by a small controlled addition of a hydrocarbon gas, such as Propane or an easily vaporised liquid, which is the source of Carbon. 100% Nitrogen (from bulk tanks) may also be used as a carrier gas, with Propylene or another hydrocarbon injected to provide the necessary Carbon.

The alloy bar frame baskets, radiant tubes and other fixturing in the furnace also pick up Carbon through many heat treat cycles. These fixtures are made of carburisation resistant alloys. Even though the atmosphere is reducing to Iron, it is still oxidising to Chromium, Silicon, and Aluminium. An oxide scale (a mixture of Cr₂O₃, SiO₂ and Al₂O₃) forms on or just beneath the surface. This oxide layer is what provides most of the alloy’s resistance to carburisation.

Carburisation embrittles high temperature alloys, so that they can neither be straightened nor weld repaired. The degree of embrittlement depends upon the amount of Carbon absorbed and upon the microstructure. Generally speaking, once an alloy has absorbed about 1% Carbon it will no longer have measurable room temperature ductility. We once examined a sample of 310 sheet which contained 4% Carbon and could readily be broken by hand. With carburised alloys, enough ductility may remain while at red heat for the metal to perform its task (as long as it is not excessively strained at high temperature or impacted at room temperature).

Alloy 601 used in a powdered Iron sintering muffle. Grain growth is from the operating temperature. Brittle fracture at room temperature comes from the large amount of Carbon (2.34%) absorbed during service. The Nitrogen – Hydrogen atmosphere is not supposed to be carburising. However Carbon enters the atmosphere from the organic compounds used as binders in the “green” powder compact. 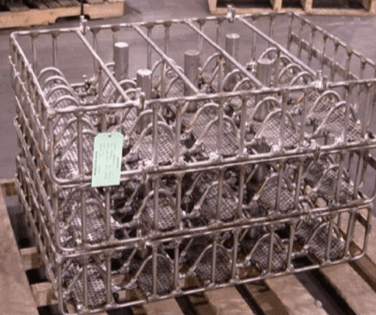 Carburisation resistance in an alloy is conferred almost entirely by the protective oxide scale, along with the Nickel content. The oxide scale is primarily chromia, with Silicon being a very potent assist. Nickel lowers the solubility of Carbon in the alloy, so that a very high Nickel grade simply will not carburise to the same level as will a lower Nickel material.

In vacuum carburising there is too little Oxygen present to form Chromium or Silicon oxides for protection. Such carburisation resistance as an alloy may come largely from its Aluminium content, which will form alumina in this process.

Among the alloys, RA330® usually does the best job for the money. RA333®, 600, 353 MA®, 601 and 602 CA® are all more carburisation resistant but also more expensive. 800H/HT does not well tolerate the effects of carburisation, in part because it lacks Silicon but also and more importantly, because it is invariably coarse grained.

When Nickel heat resisting alloys become carburised, it many also become magnetic. A pocket magnet becomes a handy tool to judge whether or not alloy fixturing has enough ductility remaining to be weld repaired or straightened.

Not due to carburisation, but a purely mechanical problem that may occur in a carburising atmosphere is of some concern. Soot may deposit from the atmosphere and “coke” in any crevices, such as cracks in weld joints or surface defects on castings. The growth of this soot deposit acts like tree roots growing in rock. It literally prises open lack of fusion in the weld or opens small pinholes in castings into large cavities.

In the case of wrought alloys, which are free of surface defects, we emphasise the need to have designs and weldments that do not provide crevices in which Carbon deposition may occur. This is one reason why full penetration welds of the return bend to straight leg are essential for maximum life in radiant tubes. On low fire soot may deposited in the root crevice (as well as in surface defects of cast return bends). On high fire this soot burns out, locally overheating and weakening the metal.

Laboratory carburisation testing must be carried out in some approximation of the industrial atmosphere of interest. The test temperature should be similar to that anticipated in service. In addition, it would be a good idea to include thermal cycles similar to the expected service conditions. Finally, duration of the test is important.

Carburisation resistance depends upon the chromia scale, the silica subscale, and the alumina scale in some alloys. For this reason the test atmosphere should in our opinion, contain an oxygen partial pressure comparable to the expected service atmosphere, in order to form a similar protective scale. One may also wish to consider Nitrogen, as Nitrogen in the atmosphere reacts with alloying elements such as Chromium, and may affect carburisation.

There have been laboratory carburisation tests run in an atmosphere of Hydrogen — 2% Methane, with no control of Oxygen partial pressure. In this environment, the alloy will not develop much of a protective scale. Such an atmosphere is one way to achieve the objective of actually carburising most alloys.

In order to braze stainless steel (with no Al or Ti) in Hydrogen it is normally considered that the dew point should be -51°C or lower. This is necessary to dissociate the oxides of most alloying elements. Alumina and titania will not be dissociated by this atmosphere. One might expect that grades such as N06601, N06025 and N0811 would form Aluminium and Titanium oxide films in a nominal Hydrogen — Methane atmosphere. Such films may affect carburisation.

Work by George Lai in H₂-CH₄, ranks several alloys in the same order as does service experience. Oxygen partial pressure was not indicated. Dr. Lai’s ranking of wrought alloys, from best to worst is: Haynes® 214, 602 CA® , Incoloy® 803, 800H/HT, and 310 stainless. The ranking is the same, whether based on weight change or on measured depth of carburisation. Alloy ranking is approximately in accordance with their Aluminium + Titanium contents. Al and Ti are the elements most likely to form a scale in this test. We might infer that these Methane – Hydrogen test results could have some relevance to performance of alloy fixturing in a vacuum carburising furnace. In vacuum carburising very small amounts of Oxygen are present from the furnace leak rate, if nothing else.

When the atmosphere simulates that of industrial interest, carburisation testing may require long exposure. There is some period of time during which significant Carbon absorption does not take place. Experience related to us from one furnace company indicated that the test had to be run for at least 1000 hours, before their results correlated with service experience.

The tests were conducted in an electrically heated industrial carburising furnace. The higher temperature results, 1038°C are from a composite electric heating element made of the five alloys shown and the 954°C results are from plate samples exposed to the actual furnace operating temperature. In both cases the total exposure hours were distributed as follows: 20% of the time in endothermic gas enriched with natural gas to Carbon potential 1.0 – 1.2% relative to Iron, 70% of the hours in Nitrogen and 10% of the time reflected air burnout cycles at 56°C reduced temperature. Various depth of cuts were machined in the samples and the Carbon contents analysed. Results here are reported at 0.045” (1.14mm) depth on the element and 0.20” (0.508mm) depth on the plate sample.

Vacuum carburising presents a different environment. Behavior of alloys in conventional atmosphere carburising do not necessarily predict how they will perform in low pressure carburising. Still, there is always a small amount of Oxygen in a vacuum carburising furnace. Some may be introduced through traces of acetone in the acetylene used as a carburising gas. The leak rate in the furnace will always permit some Oxygen to be present. While not enough to form a stable chromia or silica scale, the 2.2% Aluminium alloy 602 CA® will form an alumina film on the surface. It is this oxide that is responsible for the alloy’s resistance to carburisation in this environment.

Our team of metallurgists can provide you with technical support. Please send your technical questions to enquiries@neonickel.com

Or to find out more about our services you can visit our technical services page.