Oxidation is the reaction of Oxygen with an element in steel. The most common form of oxidation is rust. Rust itself is the build-up of thousands of molecules of Iron oxide that form the reddish colored film on the surface of steels. In stainless steels a similar process happens, just not with Iron. Instead Chromium in the base material of a stainless steel combines with the Oxygen in the air to form a stable Chromium oxide layer that protects the base material from the outside environment.

The oxide layer formed by stainless steel is much tighter and adherent than the rust formed in other steels and does not allow more Oxygen to react with the elements in the base metal. The rust is porous and allows more Oxygen to penetrate in to continue the reaction.

While the Chromium oxide is much better than its rust counterpart, it is by no means impenetrable. Mechanical stresses, impacts or other voids can expose the base metal allowing Oxygen to penetrate further into the material. As long as the material has more Chromium in the base metal and has a source of Oxygen, the oxide layer can typically repair itself.

Chromium is not the only element that plays a role in the oxidation of stainless steels. Other elements such as Aluminium, Silicon and rare earth elements like Cerium also play a role in the oxidation process. Silicon and Aluminium help by individually making a secondary oxide layer below the primary Chromium oxide. With large enough quantities of these elements, alloys like 602 CA® (2.2% Al) and 253 MA® (1.7% Si) can form secondary oxide layers that drastically increase the oxidation resistance of the alloy. While Cerium helps in oxidation, it acts in a different way. Instead of directly adding to the oxide formation on its own, it helps the oxide adhere to the base metal and promotes a thinner scale. A good analogy for how Cerium works in stainless steels is to think of it as anchor bolts for the protective Chromium oxide layer.

The maximum suggested temperature table for the heat resistant alloys features some of the high temperature alloys that NeoNickel stocks. The alloys that are highlighted in green use a combination of Chromium and Silicon for oxidation resistance. The red highlighted alloys use Aluminium in addition to Chromium and the blue highlighted alloy uses a combination of Cerium and Silicon in addition to Chromium for its oxidation resistance. 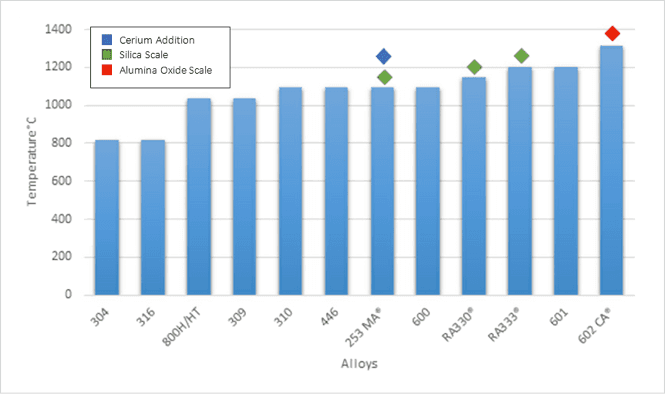